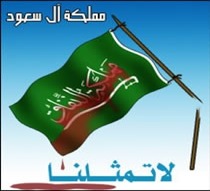 The green flag, like the black and the white flags, very often bears the shahada (Islamic testimony of faith holding that there is no god but Allah and that Muhammad is his messenger). In the case of the Saudi flag, the shahada appears above a long sword. In this image, however, the shahada has been replaced with the phrase “mamlakat al-nifaq” (“kingdom of hypocrisy”), which is part of an oft repeated sentence criticizing the Saudi regime: “mamlakat Al Sa‘ud, mamlakat al-nifaq, la tumaththiluna” (“the kingdom of the Sa‘ud family, the kingdom of hypocrisy, does not represent us”). The message is further emphasized by the appearance of the broken mast of the flag and the blood on the flag. Overall, the image represents an attempt to delegitimize the Saudi royal family and to frame it as a source of evil and as an adversary of the jihadi movement.