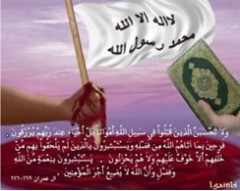 The top portion of this image contains a white flag against a brackground of clouds. According to Islamic tradition, the Prophet Muhammad used the white flag to represent both the leader of the Muslim army and the first Muslim state. It usually bears the same inscription as the black flag, which is the Muslim proclamation of faith (the shahada, or the Islamic testimony of faith holding that there is no god but Allah and that Muhammad is his messenger). In jihadi propaganda, the white flag is commonly used synonymously with the black flag to evoke the Prophet and the idea of establishing an Islamic state. The flag is held by a hand dripping in blood, and there is a pool of blood below it.

At the bottom, against the background of a ripple in the pool of blood, appears an oft-quoted verse from the Qur’an (3:169-170): “wa-la tahsabanna lladhina qutilu fi sabil Allah amwatan bal ahya’un ‘inda rabbihim yurzaqun, farihina bi-ma ‘atahum Allah min fadlihi, wa-yastabshirun bil-ladhina lam yalhaqu bi-him min khalfihim alla khawfun ‘alayhim wa-la hum yahzunun” (“Do not consider those killed in the path of God dead, on the contrary, they are alive, being sustained by God, rejoicing in the grace that God has given them, and delighting in those who have not joined them yet, those who are succeeding them, and for whom they do not fear, nor are they sad.”). The combination of the pool of red blood and the verse from the Qur’an illustrates the enormous sacrifice required for the accomplishment of jihad and evokes associations of warlike qualities and martyrdom, as well as heavenly rewards to those who sacrifice their lives.