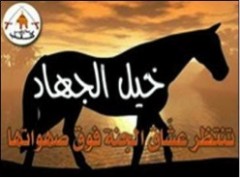 The focus of this image is a black silhouette of a horse against an orange background of a horizon. The horse is an important symbol in both pre-Islamic Arabia and Islamic culture. It is traditionally credited with positive qualities, such as chivalry, bravery in battle and victory, as evidenced in pre-Islamic poetry, hadiths (prophetic traditions or reports) and other genres of Arabic literature. Furthermore, horses are symbolic of the first generation of Muslims and their successful military campaigns, and are thus often employed to evoke specific religious sentiments with regard to the military victories of Muhammad and his companions. Hence, the horse motif is effective in evoking jihadist sentiments, which are expressly verbalized in this image by the phrase “khayl al-jihad” (“the horse of jihad”), written in white across the horse’s black silhouette. The label is part of the slogan “khayl al-jihad tantazir ‘ashshaq al-janna fawqa sahawatiha” (“the horse of jihad awaits the lover of paradise [to ride] on her back”).

The image also contains a representation of the sun touching a body of water as it peeks out from under the horse. Islam ascribes sacred qualities to water. It is a gift from God, the origin of all life on earth and the substance from which God created man (Qur’an 25:54).  Along with grass (pasture for cattle) and fire, water is one of the three things to which every human is entitled. Water, it is believed, should be freely available to all, and any Muslim who keeps water for himself that he does not need sins against God. As a symbol of creation, life, sustenance and purification, water is used to evoke notions of religious purity and can also conjure up notions of the afterlife and heavenly paradise.