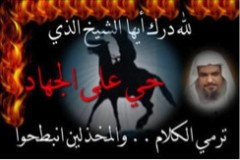 The horse and rider motif is common in jihadi visual propaganda. The rider emphasizes the element of human agency in jihad, and is a way to enhance the traditional symbol of a horse and flesh out notions of aggression and the call to jihad. The horse is an important symbol in both pre-Islamic Arabia and Islamic culture. Traditionally, horses have been ascribed with positive qualities of chivalry, bravery in battle and victory, as evidenced in pre-Islamic poetry, the Qur’an, hadiths (prophetic traditions or reports) and other genres of literature. For example, the beginning of the Qur’anic sura 100 talks about “running horses” that appear as galloping through the world toward the final goal, namely, Judgment Day. Horses are also symbolic of the first generation of Muslims and that generation’s successful military campaigns, and are thus often employed to evoke religious sentiments with regard to the military victories of Muhammad and his companions. Combined with the element of rays of light (surrounding the dark silhouette of the rider and horse), the image suggests the idea of martyrdom and heavenly reward for carrying out jihad.

The caption constitutes words of praise and appreciation for a leader who has dedicated himself to the cause of jihad. In this case, that leader (not identified) is pictured on the right side of the caption, which reads: “li-lah durruka ayyuha al-shaykh lladhi hayy ‘ala aljihad; tarmi al-kalam wal-mukhadhdhalin inbatahu” (“your capabilities are due to God, O shaykh – makes haste to jihad (in the middle, i.e. the title) – who hurl words and the feeble are thrown to the ground”). The Arabic words “hayy ‘ala al-jihad” resonate the words from the adhan (call to prayer), namely: “hayya ‘ala alsalat” (“come to prayer”). The words stand out against the black background, highlighted by their red color, clearly suggesting an invitation to join the jihad.