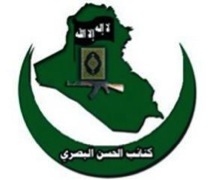 The combination of jihadi symbols—namely, the Qur’an, a firearm, a country map (Iraq), a black banner displaying a portion of the shahada (the Islamic testimony of faith holding that there is no god but Allah and that Muhammad is his messenger) and the green crescent moon—clearly evoke notions of an armed struggle sanctified by religious tradition. The struggle is localized by the appearance of the map of Iraq. The green crescent, like a white crescent, brings to the fore the group’s Islamic identity, and highlights desired qualities like purity and religious piety.

The prominent use of the color green conveys several messages. First, like the use of the crescent, green emphasizes the group’s Islamic nature, as green is considered the traditional color of the Prophet Muhammad’s tribe, and was adopted as a sacred color based on Qur’anic verses (76:21; 18:65-82) and a reliable hadith (prophetic tradition or report) that associates green with “universally good things.” In addition, the use of green conveys the idea of God’s benevolence, as green is symbolic of creation, life and sustenance. The color is also related to jihadi doctrine, as it is believed that while the corpses of martyrs lay in their graves, their souls are placed into the bodies of green birds that drink from the rivers of Eden and eat from its fruit.

The black flag is also significant, as it traces its roots to prophetic times. According to prophetic hadith, the black flag was the battle flag of the Prophet Muhammad and it was carried into battle by many of his companions. The image of the black flag has been used as a symbol of religious revolt and engagement in battle (i.e., jihad). In the contemporary Islamist movement, the black flag is used to evoke notions of defensive jihad and of reestablishing the Islamic Caliphate.