Statement from the Army of Islam on Bombings of Muslim Targets 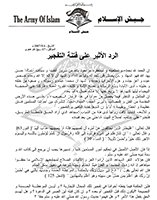 The statement is signed ‘the Army of Islam.’ The author advocates the use of Sharia to bring back the honor of the Muslim community and rid it of immorality and turmoil. He also outlines several steps that one can follow to avoid breaking the law or any misdeeds. The author also claims that because the Army of Islam fighters are too busy with their missions to destroy the Christians and Jews, they cannot be guilty of committing these attacks. The document ends with a warning to those who act in opposition to Sharia or misuse the name of the Islamic army to market their bad deeds.

A Statement From the Islamic Army in Iraq

Details commentary and respond to the Islamic Army letter

The Muslims in Central Asia and the Upcoming Battle of Islam