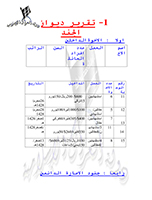 This document is a registry report documenting all incoming, permanent, and outgoing fighters in the Islamic State of Iraq. The first section records the entry of 37 fighters into Iraq. Of that number, 7 are specifically assigned to
suicide missions while 12 are assigned to fighting positions. All of the new recruits arrived between February 13 and March 2, 2007. The second section catalogues 32 permanent fighters. The list identifies each person by name and number, lists the number of family members for each fighter, and shows each person’s salary. One foreign fighter, Hani Muhammad `Ali al-Saghir, is documented as leaving Iraq on March 1, 2007 because he was unable to accomplish his mission.

Analysis of the State of ISI