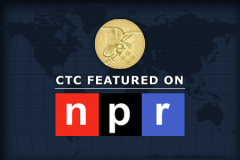 Terrorism Training Casts Pall Over Muslim Community
In an article focused on an instance of biased law enforcement training, the Combating Terrorism Center’s Bill Braniff situated the phenomenon in the broader social context surrounding the issue, stating:  “The Muslim-American community is being preyed upon from two different directions. One, the jihadist recruitment and radicalization that is actively preying on their sons and daughters; and two, the elevated levels of Islamophobia — Islamophobia at worst and distrust and alienation at best.”