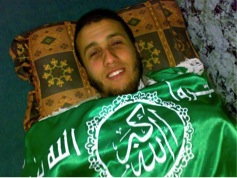 The deceased in this picture is a man by the name ‘Ali ‘Umar al-Tanani, who was killed on 13 January 2009. In a 2009 post/thread on paldf.net (http://www.paldf.net/forum/showthread.php?t=362476), an argument broke out among users on whether the picture was taken before or after his death (istishhad).

In the image, al-Tanani is wrapped with the green flag of Hamas bearing the text of takbir (the words “Allahu Akbar,” or “God is Great”) and the Qur’anic slogan (partially visible and only partially cited) Q 47:7: “in tansuru Allah yansurkum” (“if you assist, God will render you victorious”). The green of the flag resonates the idea of God’s benevolence, and is symbolic of creation, life and sustenance. Furthermore, green is considered the traditional color of the Prophet Muhammad’s tribe, and has been adopted as a sacred color based on Qur’anic verses (76:21; 18:65-82) and a reliable hadith (prophetic tradition or report) that associates green with “universally good things.” Finally, the color is related to jihadi doctrine, as it is believed that while the corpses of martyrs lay in their graves, their souls are to be put into the bodies of green birds that drink from the rivers of Eden and eat from its fruit.

This specific image has been added on numerous message boards to illustrate or discuss the popular notion of “ibtisamat al-shahid” (“a martyr’s smile”). A martyr’s face is believed to reflect what the soul witnesses upon ascension to heaven, namely, the beauty and majesty of paradise. Furthermore, even after the soul has left the body it is believed to continue to produce a sweet smell, like the smell of musk.

Image with Lyrics from Famous Nashid