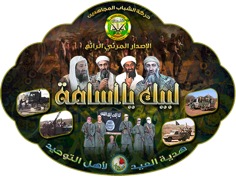 On 20 September 2009, al-Shabab media outlet released a forty-eight minute video called “labbayka ya usama” (“Here I am at your service, O, Usama”), a fairly polished production that demonstrates the rapid transformation of the group’s media wing from 2007 to 2009. The image is from the video’s introduction, which states that it is a gift on the occasion of ‘Id al-Fitr (the celebration that ends the fast of the holy month of Ramadan) to al-Qa’ida Central leader Usama bin Ladin and the “ahl al-tawhid” (“people of absolute monotheism”). The caption at the bottom reads: “hadiyat al-‘id li-ahl al-tawhid” (“holiday gift for the people of absolute monotheism”).

At the bottom center appears an encircled rose with the words “‘id mubarak” (“blessed holiday”). Flowers in general represent vitality, as well as life and its incessant pace, and thus will evoke notions of purity, divine power, life after death, paradise and martyrdom, especially in the context of jihadi imagery. Red flowers or roses lack the purity of white ones, but because they are linked to blood, passion and warlike qualities, they are symbolic of martyrdom by violent means.

Above the rose appears a black banner bearing the text of the shahada (Islamic testimony of faith holding that there is no god but Allah and that Muhammad is his messenger) amidst a group of fighters. According to prophetic tradition (hadith), the black flag was the battle flag of the Prophet Muhammad and it was carried into battle by many of his companions. The image of the black flag has been used as a symbol of religious revolt and engagement in battle (i.e., jihad). In the contemporary Islamist movement, the black flag with the shahada is used to evoke notions of jihad and of reestablishing the Islamic Caliphate.

Image of al-Aqsa Mosque & Dome of the Rock