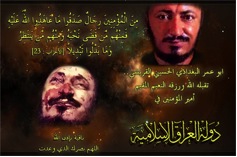 While participating in jihad gives a jihadist important religious credibility, death in battle provides immortality, as the deceased is ranked a martyr. It is believed that Muslim martyrs will be highly rewarded in the afterlife for their sacrifice and hold a special position in heavenly paradise. It is therefore not surprising that martyrdom is a central theme in jihadi visual propaganda. According to Muslim law, any person who died in defense of his faith is entitled to a Muslim burial without the customary ablution or purification process, or the change of clothing, which are necessary in the case of those who did not earn the rank of martyr (shahid). In other words, the rank of martyrdom renders a corpse legally pure. For this reason, it is fairly common for images of bloody faces to appear in various jihadi media releases, as well as in posts on jihadi forums. Images of this sort are presented as evidence that the deceased attained the rank of shahid, as well as to further dehumanize and delegitimize the enemy, whose cruelty is supposedly exposed in the image.

The caption on the right identifies the figure as Abu ‘Umar al-Baghdadi al-Husayni al-Qurayshi and expresses the first part of a prayer, which concludes in the bottom left of the image. The prayer reads: “taqaballahu Allah wa-razaqahu al-na‘im al-muqim, amir al-mu’minin fi dawlat al-‘iraq al-islamiyya—baqiya bi-idhni Allah, allahumma, nasruka lladhi wa‘adta” (“[Abu ‘Umar], may God accept him, and bestow upon him his eternal favor, commander of the faithful in the Islamic State of Iraq, which remains standing—God permitting; O God, [give us] your victory that you have promised”). The caption on the top left is a quote from the Qur’an (Q 33:23) that begins with the phrase: “min al-mu’minin rijalun sadaqu ma ‘ahadu Allaha ‘alayhi” (“there are men among the believers that remain true to what they had promise God”).