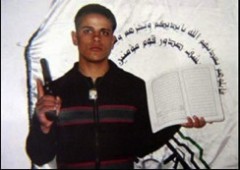 It is believed that Muslim martyrs will be highly rewarded in the afterlife for their sacrifice and that they hold a special position in heavenly paradise. It is therefore not surprising that martyrdom is a central theme in jihadi visual propaganda. This specific image is a representation of a figure with his last will and testament. Such images almost always include a weapon, a Qur’an and other symbolic items. The combination of symbolic elements highlights the religious importance of martyrdom and its violent nature, while also facilitating the group’s efforts to emphasize its commitment to the cause. The figure is standing against a white background designed to evoke notions of death in a state of purity, grief and mourning, as white is the color of shrouds. The white background contains a Qur’anic quote (9:14) from a chapter widely cited by jihadi propagandists. It reads: “qatiluhum, yu‘adhdhibuhum Allahu bi-aydikum wa-yukhzihim wa-yansurkum ‘alayhim; wa-yashfi sudura qawm al-mu’minin” (“fight them, God will make them suffer at your hands, sadden them and render you victorious against them; He will restore to health the hearts of faithful”).

It should also be noted that the would-be martyr is pointing upward with his index finger in a gesture known as “Usbu’ al-shahada” (the finger of shahada).  This gesture is used when articulating the shahada (Islamic testimony of faith holding that there is no god but Allah and that Muhammad is his messenger).