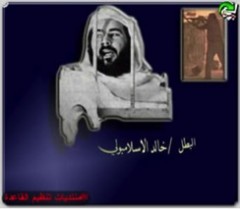 The figure in the image is identified in the caption as “al-batal khalid al-Islambuli” (“the hero Khalid al-Islambuli”), a member of the Egyptian Islamic Jihad who participated in the assassination operation of Egyptian president Anwar al-Sadat in 1981. The assassination was the organization’s response to the 1979 peace treaty concluded between Egypt and Israel, which was promoted and signed by Sadat. Here, the figure is shown dressed in white, evoking notions of death (in the state of purity), shrouds, grief and mourning. The faint light under the figure signals to the viewer that he successfully attained martyrdom. It is believed that Muslim martyrs will be highly rewarded in the afterlife for their sacrifice and that they hold a special position in heavenly paradise. It is therefore not surprising that martyrdom is a central theme in jihadi visual propaganda.