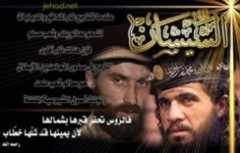 While participating in jihad imbues an individual with important religious credibility, death in battle distinguishes the deceased as a martyr. This distinction is particularly important for jihadi leaders.  With martyrdom, their personalities are elevated, within the jihadist community, to the status of mythical heroes, on par with famous historical warriors and the martyrs of Islamic tradition. Indeed, their martyrdom not only further legitimizes their cause and their actions, but in many cases, the individuals become motifs in their movement’s visual propaganda.

In this image, the leader of Chechen mujahidin (fighters), Amir Khattab, also known as Habib ‘Abd al-Rahman, appears with fellow fighter Abu Sa‘id al-Qurtasha’i. Golden rays of light originating from the top right corner give an aura of divination and life after death, i.e., the achievement of rank of martyrdom. The word “al-shishan” (“Chechnya”) is colored in the same yellow gold. There are two texts in image. The first, which is short and clearly printed white against the black background, reads: “fal-rus tahfiru qabraha bi-shamaliha li-anna yaminaha qad shallaha khattab, rahimahu Allah” (“The Russians are digging their own grave with their left hand because their right has been cut off by Khattab, may God have mercy on him.”). The words “may God have mercy on him” are commonly stated after the name of the deceased. The second text is a short narrative that reads: “‘indama tata’ajjaju nar al-madafi‘ wal-dabbabat li-tamhu ma‘alim balad wa-sha‘b muslim, fa-inna hunaka nar aqwa tata’ajjaju fi sudur al-mujahidin al-abtal li-tamhu ma‘alim sha‘b mulhid, wa-tajtaththu usul al-shuyu‘iyya al-muntanna” (“When the fire of tanks and artillery burns to erase traces of a Muslim land and people, there is a fiercer fire burning in the breasts of heroic mujahidin to erase the traces of an apostate people, and pulling out the farthest remnants of the Soviets”).