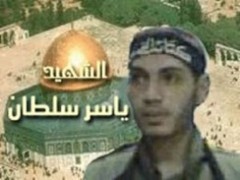 While Muslims across sectarian lines share a reverence for many holy sites, some sites hold special significance for certain groups. For instance, the Dome of the Rock (located in Jerusalem) is recognized and revered by all Muslims, as it was built in 692 A.D. by the Umayyid caliph ‘Abd al-Malik on the site where Muslims believe the Prophet Muhammad ascended to heaven in his mi‘raj (night journey). Indeed, it is considered the third holiest site in Islam after Mecca and al-Madina. At the same time, the Dome of the Rock is a powerful symbol of Palestinian nationhood. Because of its status in Islam, the Dome of the Rock is often used to code a message of inspiration for jihadi activism and the goal of martyrdom. Here, the face of the Qassami operative Yasir Sultan, also known as Abu al-‘Abbas, appears on the background of the Dome of the Rock. The image is intended as a celebration of Sultan’s martyrdom and a commemoration of the attack he carried out on 24 March 2004, which was the first reprisal operation for the assassination of Hamas leader Ahmad Yasin by Israeli forces on 22 March 2004.