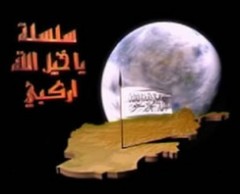 In the image, a map of Afghanistan is shown with a flag pitched in its center, displaying the shahada (Islamic testimony of faith holding that there is no god but Allah and that Muhammad is his messenger). This designates Afghanistan as an important theater for jihad, and implies a national obligation to join the struggle in order to establish a true Islamic state. At the same time, by juxtaposing the country map with a picture of the earth, the image is attempting to show that Afghanistan is an integral part of a broader, global jihadi movement. Indeed, jihadi visual propaganda often uses images of the globe/planet earth in order to globalize specific issues and conflicts, as well as to articulate the global aims/nature of particular groups. The caption reads “silsilat ya khayl Allah irkibi,” referring to a series of publications or shows entitled “O cavalry of God, ride!” The title evokes a famous hadith (prophetic tradition or report) in Islamic historiography, in which the ‘Abbasid caliph al-Mu‘tasim (d. 842. A.D.) calls out to his troops “ride, O cavalry of God” before embarking on a jihad against the numerically superior forces of the Byzantine Emperor Theophilus and ultimately defeating them in 838 A.D. The analogy to the current jihadi struggle with superior Western forces is obvious.