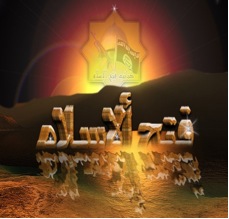 Images of mountains are a common motif in jihadi visual propaganda that may allude to regions with completed or ongoing operations, such as Afghanistan, Chechnya and Kashmir. More generally, however, mountains evoke divine omnipotence, eternity and grandeur. Superimposed on the sun in the center is a common Islamic flower motif with an image of the Dome of the Rock, a black banner bearing the text of the shahada (Islamic testimony of faith holding that there is no god but Allah and that Muhammad is his messenger) and an AK47. The caption in the flower reads: “kata’ib fath al-islam” (“Fath al-Islam Brigades”).

The appearance of the Dome of the Rock is a common motif in jihadi imagery. Reverence for it is shared by all Muslims across sectarian lines, though it holds special significance for Palestinian groups who utilize it as a symbol of Palestinian statehood. It was built in 692 A.D. by the Umayyid caliph ‘Abd al-Malik on the site where Muslims believe the Prophet Muhammad ascended to heaven in his mi‘raj (night journey), and it is considered the third holiest site in Islam after Mecca and al-Madina. Because of its status in Islam, the Dome of the Rock is often used to code a message of inspiration for jihadi activism and the goal of martyrdom.

According to prophetic tradition (hadith), the black flag was the battle flag of the Prophet Muhammad and it was carried into battle by many of his companions. The image of the black flag has been used as a symbol of religious revolt and engagement in battle (i.e., jihad). In the contemporary Islamist movement, the black flag with the shahada is used to evoke notions of jihad and of reestablishing the Islamic Caliphate.