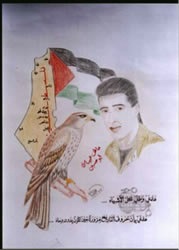 The world of birds is highly important in the symbolic language of Islam. Pre-Islamic Arabs imagined soul birds fluttering around the grave of the deceased, and the bird continues to symbolize the flight of the soul beyond the limits of the material world.

The symbolic use of a falcon is to be expected in a culture where falconry was and, in some areas (particularly the Gulf), remains a traditional pastime. A tamed falcon always flies home to his owner’s fist. A worthless fledgling is turned into a well-trained, obedient hunting bird, which also serves as a symbol for the education that the novice fighter/student must undergo. The falcon is seen as a strong predatory bird and thus often evokes notions of the power of love or divine grace, which seizes the human heart, grasping it like a falcon carrying away its pray. Hence, falcons represent all of the qualities that a jihadi fighter is said to embody, as well as his eventual martyrdom. The caption at the bottom of this image is a poem by the Iraqi poet Muzaffar al-Nawwab, which reads: “‘allamani watani kull al-ashya’, ‘allamani bi-anna huruf al-ta’rikh muzawwara hina takun bi-dun dima’” (“my homeland has taught me everything, it has taught me that the letters of history are fake/ a forgery when they are [written] without blood”).

The appearance of the map of Palestine with a flag designates Palestine as an important theater of struggle, and implies a national obligation to join the fight. Note that the map is in Arabic and contains no traces of Israel. The word “filastin” (“Palestine”) is written down the center of the map in red, resonating the blood mentioned in the poem and signaling the achievement of martyrdom of the figure featured in the image. The name written in red is ‘Atif ‘Ubayan Abu Husayn.