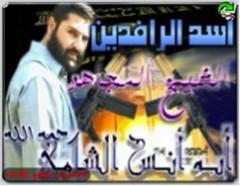 This image features a picture of Abu Anas al-Shami and the phrase “asad al-rafidayn: al-shaykh al-mujahid abu anas alshami, rahimahu Allah” (“the lion of the two rivers [Iraq]: the shaykh, fighter, Abu Anas al-Shami, may God have mercy on him”). The phrase is significant in two respects. The first is the reference to a lion, which is an important motif in Islamic art and culture that evokes qualities of bravery, strength and valor for Muslim audiences. The motif of the lion recurs in the Qur’an, the hadith (prophetic traditions) and classical Arabic poetry. In the modern era, it has become a key motif in jihadist propaganda as a term of honor for both major jihadi leaders and for low-ranking militants, and may also be used to suggest martyrdom or designate a martyr-to-be. Here, by describing al-Shami as a lion, the propagandist depicts him as a just warrior, and as a Muslim striving toward martyrdom through the righteous path of jihad. The second significant feature is the reference to Abu Anas al-Shami, also known as ‘Umar Yusuf Jum‘a, who was a Palestinian cleric who fought the Soviets with Usama bin Ladin in Afghanistan in the 1980s. Al-Shami joined Zarqawi’s Jama‘at al-Tawhid wal-Jihad (al-Qa’ida in Iraq) in 2003, becoming Zarqawi’s second in command, and was killed by an American missile strike on his car in September 2004 near Abu Ghrayb.

The top banner is unmistakably a black flag of war. The black flag traces its roots to prophetic times. According to hadith (prophetic tradition or report), it was the battle flag of the Prophet Muhammad and was carried into battle by many of his companions. The image of the black flag has been used as a symbol of religious revolt and engagement in battle (i.e., jihad). In the contemporary Islamist tradition, the black flag is used to evoke notions of jihad and of reestablishing of the Islamic Caliphate.