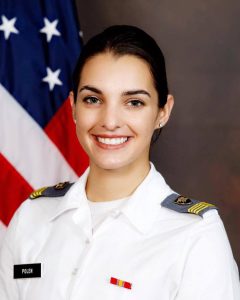 Meet Cadet Samantha Polen, the CTC Cadet of the Month for October 2018. Samantha is from Orange County, California, where she attended California State University Fullerton for one year prior to coming to West Point. Here at the United States Military Academy, she is majoring in nuclear engineering and minoring in terrorism studies, with a focus in counterterrorism. As a senior, she is the Headquarters and Headquarters Company (HHC) Commander, a member of the Officer Christian Fellowship (OCF), and a certified yoga instructor.

Since joining the minor, Samantha has had the opportunity to apply academic knowledge to practical exercises and internships. During the academic year, she went to the FDNY to conduct a crisis management scenario in NYC, and visited Jersey City to discuss peaceful coexistence of various forms of Christianity, Islam, Judaism, Sikhism, and Hinduism. Last summer, she interned with the Defense Intelligence Agency (DIA) in the Pentagon. There, she conducted unclassified research and provided analysis of terrorist groups in various areas of concern around the world that may develop into transnational terrorist threats. In the national-level counterterrorism warning center, she observed establishment of DoD terrorism threat levels by country. She also participated in discussions with General Officers and senior DoD officials, and attended weekly briefs to high-level policy makers in the Joint Staff and the Office of the Secretary of Defense. From this experience, she learned to prioritize mission critical requirements through response to requests for information, drafting, and coordinating of joint production.

Samantha is looking forward to graduating from West Point and commissioning as an Adjutant General Officer in May 2019 and hopes to post to Ft. Campbell, Kentucky. In the future, Samantha plans to serve in the Judge Advocate General’s Corps and use her knowledge from the CTC to focus in international/operational law.