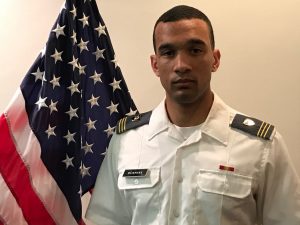 Meet CDT David Weinmann, the CTC Cadet of the Month for May 2018. The Firstie from Hercules, California, has focused his academic development on the effect that non-state actors have on the international community. David is an International Relations major and is minoring in Terrorism Studies. He has competed on West Point’s National Champion Orienteering Team all four years of his time at the Academy and debated with the Ethics Debate Team during his plebe and yearling years.

David was a member of the Combating Terrorism Center’s team for the Countering Violent Extremism Project under the U.S. Department of State’s Peer-to-Peer program. The purpose of the project was to find new and innovative ways to counter the extreme and often violent narrative of groups like the Islamic State online. David helped research and network with experts for the project and helped present the final product to the State Department.

David’s honors thesis is focused on the wave of anarchist terrorism at the turn of the 20th century. He is exploring the way in which the international community cooperated in order to put an end to the anarchist terror threat and contribute to the collective security of governments across the globe. David is applying the lessons learned from this cooperative effort at the turn of the 20th century to the current Global War on Terror in order to draft recommendations for how to generate greater cooperation between states today. CDT Weinmann plans to serve as a Military Intelligence Officer in the United States Army and to apply his understanding of international politics and security studies to the threats currently facing the nation.