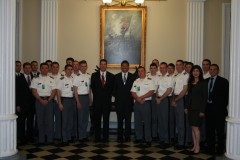 We Teach: As an institution, we embrace the unique responsibility to prepare cadets to think critically about the challenges they will face during war and peace. To this end, the Center directs multiple graduate-level seminars on Terrorism and Counterterrorism and administers a minor in terrorism studies that focuses on an interdisciplinary approach to understanding these complex issues.