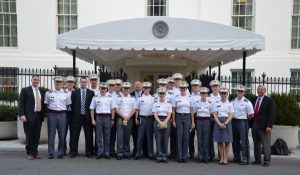 West Point cadets minoring in Terrorism Studies with the Combating Terrorism Center traveled to Washington, D.C., for the yearly academic trip section on 26-28 March. Cadets first visited the National Counterterrorism Center, which included a briefing from the Deputy Director and a tour of the operations center. Next was the White House where they met with national security officials from the Vice President’s office-including National Security Advisor to the Vice President Andrea Thompson-toured the Situation Room, and met LTG H.R. McMaster, the President’s National Security Advisor. On 28 March, cadets visited FBI Headquarters to meet with leadership, including a special session with Director James Comey. In the afternoon, cadets went to the Central Intelligence Agency where they met with Director Mike Pompeo, toured the CIA Museum, and met with operatives and analysts involved in the counterterrorism mission.