Do Sanctions Always Stigmatize? The Effects of Economic Sanctions on Foreign Aid 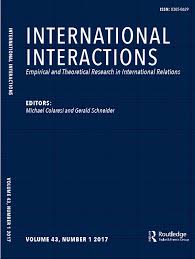 In February 2016, the journal International Interactions published “Do Sanctions Always Stigmatize? The Effects of Economic Sanctions on Foreign Aid,” an article co-authored by Bryan R. Early and Amira Jadoon.

Click here to learn more about the article, or read the abstract below.

A prevalent view among both scholars and policymakers is that economic sanctions stigmatize and isolate their targets. According to this perspective, the stigma associated with economic sanctions should signal to foreign aid donors that they should be more cautious and restrained in providing assistance to sanctioned states. We test this signaling-based theory via a large-n analysis of the impact that sanctions imposed by the United States and those supported by the United Nations (UN) had on the aid flows of 133 recipient states from 1960–2000. Contrary to expectations, our results indicate that being subject to sanctions supported by the UN does not have a negative effect on target states’ aid flows, and being sanctioned by the United States actually has a positive effect on them. We explore two potential explanations for our puzzling findings based upon donor self-interest and donor altruism via a scoping analysis of eight sanctions cases in which target states received greater than expected aid flows. Our findings suggest that theories based upon donor self-interest represent the most promising explanation for why individual donors may increase their aid to sanctioned states.