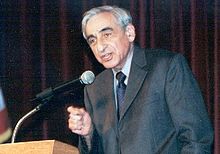 Prof. Michael Walzer is one of America’s foremost political thinkers. He has written about a wide variety of topics in political theory and moral philosophy, including political obligation, just and unjust war, nationalism and ethnicity, economic justice, and the welfare state. He visited the CTC on December 6, 2011 and participated in a round table discussion with CTC research staff before and after lecturing a combined audience of SS465 and Terrorism minor cadets as well as other members of the Academy. Prof. Walzer’s lectures discussed moral implication of fighting asymmetric conflicts; their title was “Can the Good Guys Win? –is it possible to fight Asymmetric wars in accordance with the rules of jus in bello?”