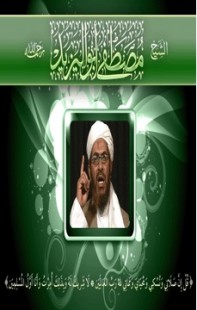 The image is of the al-Qa’ida general commander in Afghanistan, Mustafa Abu Yazid.The Egyptian al-Yazid, who was (for a long time) al-Qa’ida Central’s (AQC) financial manager, was reportedly killed in a U.S. unmanned drone missile strike along with members of his family in North Waziristan, Pakistan. He was also known to be one of AQC’s liaisons with the Afghan Quetta Shura (Council) of the Taliban, headed by Mullah Muhammad ‘Umar.

The caption at the bottom of the image is a verse from the Qur’an (Q 6:162-63), which reads: “qul inna salati wa-nusuki wa-mahyaya wa-mamati li-lah rabb al-‘alamin; la sharika lahu, wa-bi-dhalika umirtu, wa-ana awwal al-muslimin” (“say: my prayer, my devotion, my life, my death are for God, Lord of the Worlds; He has no partner, and I was commanded with this [i.e., monotheism], and I am the first Muslim”).