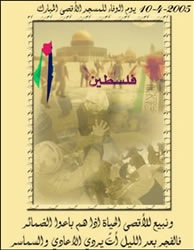 The image utilizes a rather dull yellow tone, except for the word “filastin” (Palestine) in blood red at its center, flanked by the Palestinian flag on the right, and a tri-colored map of Israel/Palestine on the left. The caption reads: “yawm al-wafa’ lil-masjid al-aqsa al-mubarak; wa-nabi‘u lil-Aqsa al-hayat, idha hum ba‘u al-dama’ir; fal-fajr ba‘da al-layl atin, yarwi al-a‘awi wal-samasir” (“Day of loyalty to the blessed Masjid al-Aqsa; we will pledge our life for al-Aqsa, as they sell their conscience; Day break after dark appears, telling the stories of the aggressors and the brokers of the land.”). The second part of the caption comes from a famous poem by Husam Ahmad.

Images of stone-throwing youth are commonly used to evoke notions of resistance to tyranny and to illustrate the asymmetric nature of the struggle with Israel. This message is further emphasized by the fact that the clash between Palestinians and the Israeli soldiers in the picture is situated in the lot bordering the Al-Aqsa mosque, which is located in Jerusalem and is recognized and revered by all Muslims, while also serving as a powerful symbol of Palestinian nationhood.

Image with Text from Nashid & UBL