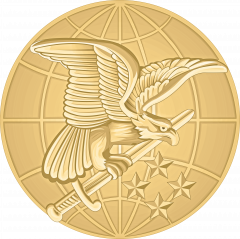 Mayor Bloomberg is announced to the Corps of Cadets at the Mess Hall.