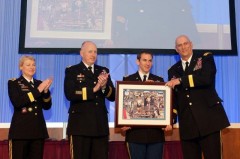 CTC Director LTC Liam Collins was awarded “Army Coach of the Year” at the annual AUSA Winter conference.  The award, presented by General Raymond Odierno, was in recognition of Liam’s contributions to the All-Army cross country and marathon teams. His coaching experience with other 10-mile teams includes Fort Bragg (1993-1997), U.S. Army Europe (1998-2000), and Fort Leavenworth (2004). Liam is a West Point grad (’92) and has been coaching for over 17 years. He is himself an accomplished runner having represented the Army at the World Military Games marathon and World Military Cross Country Championships.