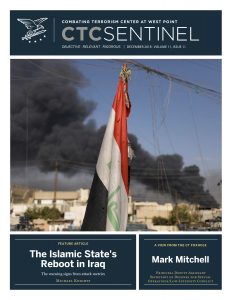 After its pivot to insurgency, is the Islamic State losing power or preserving strength in Iraq? This is the research question posed by Michael Knights in this month’s cover article. Attack metrics, he writes, “paint a picture of an insurgent movement that has been ripped down to its roots,” but also one that is vigorously working to reboot by focusing “on a smaller set of geographies and a ‘quality over quantity’ approach to operations.” Knights warns that “the Iraqi government is arguably not adapting fast enough to the demands of counterinsurgency, suggesting the need for intensified and accelerated support from the U.S.-led coalition in order to prevent the Islamic State from mounting another successful recovery.”

Our interview is with Mark Mitchell, Principal Deputy Assistant Secretary of Defense for Special Operations/Low-Intensity Conflict, who was among the first U.S. soldiers on the ground in Afghanistan after 9/11. Mitchell previously served as a Director for Counterterrorism on the National Security Council where he was intimately involved in significant hostage cases and recovery efforts in Syria, Yemen, Afghanistan, Pakistan, and Somalia. He was also instrumental in establishing the framework for the landmark Presidential Policy Review of Hostage Policy.

Dan Joseph and Harun Maruf, the authors of the recently published book Inside Al-Shabaab: The Secret History of Al-Qaeda’s Most Powerful Ally, explain why the group remains a significant threat inside Somalia. Amira Jadoon and Sara Mahmood examine recent plans circulated by the Pakistani Taliban under its new leader Mufti Noor Wali Mehsud to try to reverse the group’s decline. Bennett Clifford and Seamus Hughes document the case of Aws Mohammed Younis al-Jayab, a returned foreign fighter to the United States who pleaded guilty in October 2018 to material support to a terrorist organization. His case sheds new light on cross-border foreign fighter recruitment networks in the United States and Europe, and the potential threat they pose.

The Islamic State Inside Iraq: Losing Power or Preserving Strength?

No End in Sight for the al-Shabaab Threat to Somalia

Fixing the Cracks in the Pakistani Taliban’s Foundation: TTP’s Leadership Returns to the Mehsud Tribe