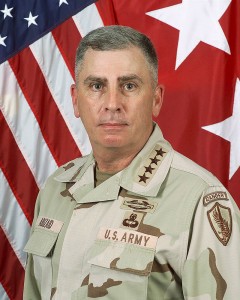 GEN(R) Abizaid served as Distinguished Chair of the CTC from 2008 to 2013. He retired after 34 years of service to the Nation as the longest-serving commander of United States Central Command (USCENTCOM). His combat and operational deployments are extensive, including Grenada, Lebanon, Bosnia-Herzegovina, Kosovo, Haiti, and Iraq. As the commander of USCENTCOM, GEN(R) Abizaid’s area of responsibility included the Middle East, the Horn of Africa, and South Asia. Both a graduate of and later the 66th Commandant at the U.S. Military Academy at West Point, GEN(R) Abizaid was also an Olmstead Scholar at the University of Jordan in Amman, and he holds a master’s degree in Middle Eastern studies from Harvard University. He is the founder of and senior partner at JPA Partners, LLC.