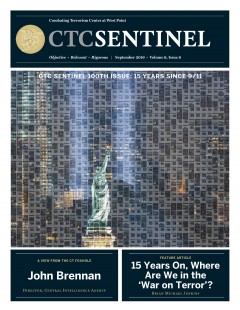 The Combating Terrorism Center published its 100th issue of the CTC Sentinel this month. The issue, which coincided with the 15th anniversary of 9/11, featured an exclusive interview with CIA Director John Brennan, which was picked up by numerous news outlets, including CNN and ABC News. Other contributors to the milestone issue include Brian Michael Jenkins, Charles Lister, Anne Stenersen, and Jacob Shapiro.

The CTC Sentinel is the Center’s flagship publication and was first published in December 2007. All 100 issues are available here.