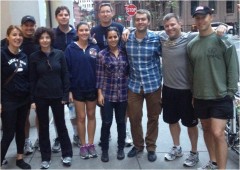 Members of the CTC “followed in the footsteps” of hero firefighter Stephen Siller during the 2012 Tunnel to Towers Run on Sunday, 30 September. The CTC joined 25,000 other participants, including almost 2,000 cadets and thousands of military, police, fire, and first responders.

Since its inception in 2003, the CTC has enjoyed a long-standing relationship with the FDNY, regularly engaging in teaching and training with the department.  The CTC has also been fortunate enough to benefit from the guidance and mentorship of Assistant Fire Chief Joseph Pfeifer who has been a non-Resident Senior Fellow since 2009.