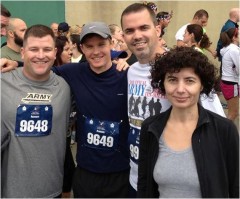 Several members of the CTC “ran in the footsteps of heroes” again in the 2013 Tunnel to Towers run on September 29th. The route retraces the last steps of FDNY Firefighter Stephen Siller who ran through the Battery Tunnel to the World Trade Center before it collapsed. The CTC has enjoyed a long-standing relationship with the Fire Department of New York and it is fortunate to have Assistant Fire Chief Joe Pfeifer, head of the FDNY’sEmergency Preparedness and Counterterrorism Division, as a Senior Fellow.