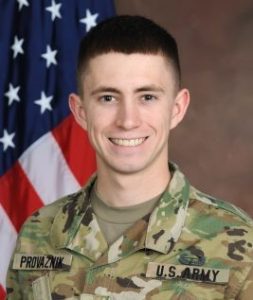 Meet CDT Wade Provaznik, the CTC Cadet of the Month for October 2017. The senior from Fort Collins, Colorado, has focused his academic interests on national security policy and terrorism, majoring in Systems Engineering and minoring in Terrorism Studies. He currently serves as the Brigade Military Development Officer, overseeing all academic year military training operations for the Corps of Cadets. Wade enjoys reading, playing soccer, and training for the upcoming Marine Corps Marathon (his first). In addition to his studies with the CTC, he has earned the Dean’s Pentathlete Award, the Superintendent’s Award for Excellence, and the Distinguished Cadet Award.

Currently, Wade is undertaking a capstone project for the Army’s Intelligence and Security Command to improve the Army’s Open Source Intelligence capability by combating the “echo effect” found in social media and intelligence reporting. His senior thesis, however, will primarily focus on identifying and understanding the formal and informal relationships that govern U.S. national security to explore the policy development process and organizational efficiency. Wade plans to serve as an Aviation Officer in the United States Army and draw from his tactical experience and strategic understanding to lead in the national security community both in and out of uniform.