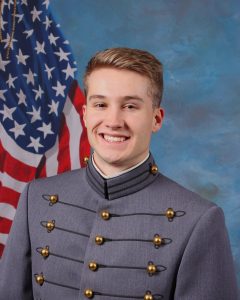 Meet CDT Darby Felter, the CTC Cadet of the Month for October 2022. Darby comes from Palo Alto, California, and is the son of Lynn and Joseph Felter. At West Point, Darby is a senior majoring in Computer Science with a minor in Terrorism Studies. Before moving to Palo Alto, Darby spent three years living at West Point while his father served as the director of the CTC and a professor in the SOSH department. Darby is currently a Company Honor Officer and enjoys spending his free time playing guitar, ultimate frisbee, and snowboarding.

Since joining the Terrorism Studies Minor, Darby has had the opportunity to participate in crisis simulation exercises with the Fire Department of the City of New York and to meet with members of the intelligence community and senior Army officials. He plans to join the CTC on its trip to Washington, D.C. in the spring.

Darby hopes to commission in the United States Army as an Electronic Warfare Officer in the Cyber Branch. In the future, Darby aims to attend graduate school at Stanford University and come back to teach at West Point in the EECS department.