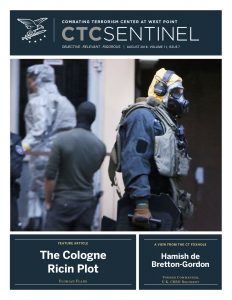 The cover article of the August 2018 issue of the Combating Terrorism Center’s flagship publication, CTC Sentinel, was recently featured by two major news organizations: The Daily Beast and The New York Times. On September 5, The Daily Beast republished the article in its entirety. Then, New York Times foreign correspondent Rukmini Callimachi cited the piece in a September 12th article entitled, “Why a ‘Dramatic Dip’ in ISIS Attacks in the West Is Scant Comfort.”

The Sentinel article, written by Florian Flade, outlines new details about the June 2018 Cologne, Germany, ricin plot. Florian Flade is Chief National Security Reporter for the WELT and WELT am Sonntag newspapers. He is based in Berlin, and this was his second article for the CTC Sentinel.