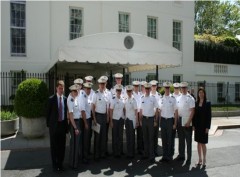 The Combating Terrorism Center brought 16 cadets to Washington, DC for meetings with policymaker on 9 and 10 April 2012, in a continuing effort to offer an interagency look at counterterrorism. The cadets were led by staff Dr. Scott Helfstein, Gabriel Koehler-Derrick and Irina Garrido de Stanton.

9 April began with a series of meetings at the National Security Staff (NSS) with John Brennan (Assistant to the President for Homeland Security and Counterterrorism), Nick Rasmussen (NSS Senior Director for Counterterrorism), and LTG(R) Douglas Lute (NSS Director for Afghanistan). They discussed the role that the NSS plays in their respective areas, and blended that with substantive insights about continuing challenges. The cadets next went to the Department of State (DoS) where they met with Jake Sullivan (Director of Policy Planning), Anne Witkowsky (Deputy Coordinator (DAS) for Multilateral Affairs and Homeland Security), and Mark Thompson (Deputy Coordinator for Counterterrorism Operations) who focused on contextualizing counterterrorism relative to concurrent issues in global politics on the DoS agenda. The final meeting of the day was at the Department of Treasury, where the cadets met with Luke Bronin (Deputy Assistant Secretary for Terrorist Financing).

10 April was equally instructive, with the day beginning at the Federal Bureau of Investigation. The cadets first met with Josh Poole (Director of Counterterrorism Branch) who offered a brief on the evolving terrorist threat in the United States, which was followed by a meeting with FBI Deputy Director Shawn Joyce. Joyce offered insights into leadership in the national security domain. The trip concluded with a visit to the Pentagon where the cadets met with HON Michael Sheehan (Assistant Secretary – SOLIC) and COL Mike Mitchell (former 10th Group Commander) who discussed how policy impacts tactical level decisions in counterterrorism. The concluding discussion of the trip was hosted by Peter Verga (Chief of Staff to the Undersecretary of Defense for Policy) focused on future security challenges.

A special thank you to all of our hosts in Washington D.C. for taking time out of their busy schedules to meet with the cadets.