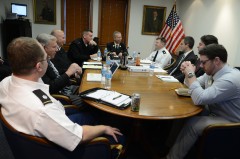 Major General Patrick Murphy, the 52nd Adjutant General of New York, and Brigadier General Ray Shields, the Director of the Joint Staff for the New York National Guard, visited the CTC on Monday, March 4, 2013. Co-hosting the meeting with CTC Director Bryan Price was Chief Joseph Pfeifer, the Fire Department of New York’s Chief of Counterterrorism and Emergency Preparedness, and SS464 Course Director Mr. Brian Dodwell. The group collaborated on plans to include MG Murphy and his team on the upcoming and 5th annual CTC-FDNY Crisis Simulation Exercise in April that serves as the capstone event for cadets taking the CTC’s course in Homeland Security and Defense. The simulation provides an opportunity for cadets to apply what they have learned in the classroom to (simulated) real-world crises under the tutelage of CTC faculty and professionals from the FDNY. In the process, the cadets gain invaluable leadership development and insight into crisis management, as well as an understanding of the challenges of civil-military responses to major disasters. In addition to involvement with the National Guard, this year’s event will likely include participation from US Northern Command representatives.