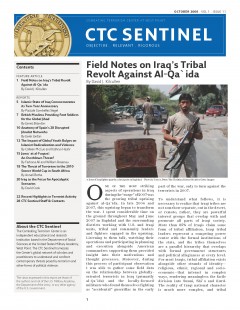 One of the most striking aspects of operations in Iraq during the “surge” of 2007 was the growing tribal uprising against al-Qa`ida. I spent considerable time on the ground throughout May and June 2007 in Baghdad and the surrounding districts working with U.S. and Iraqi units, tribal and community leaders and fighters engaged in the uprising. This article tentatively examines some of the reasons for the tribal revolt against al-Qa`ida.

Iraq as the Focus for Apocalyptic Scenarios

The Impact of Global Youth Bulges on Islamist Radicalization and Violence