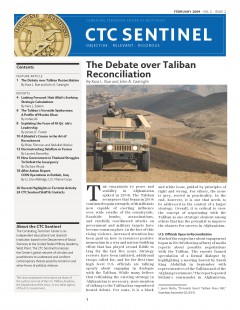 Following in the footsteps of the Afghan Taliban battling U.S.-led NATO forces in Afghanistan, the Pakistani Taliban are fighting on two fronts. In addition to attacking Pakistani troops in the tribal belt and in some parts of the settled areas of the North-West Frontier Province (NWFP), they are also waging a stunning propaganda campaign aimed at terrorizing security forces and gaining sympathy from the local population. Tehrik-i-Taliban Pakistan (TTP)—an umbrella group of militants operating in the Federally Administered Tribal Areas (FATA) and in parts of the NWFP—is running a full-fledged insurgency under the leadership of Baitullah Mehsud, a tribal militant commander who is also suspected of assassinating Pakistani politician Benazir Bhutto in December 2007. Pakistan’s security forces have made a continuous effort to break the backbone of the insurgency. Despite successful strikes against militant centers, Taliban spokesmen always counter government claims in an amazing demonstration of communication and propaganda prowess; Pakistan’s newspapers publish statements by purported Taliban spokesmen almost every day.

Recently, as Pakistani forces intensify operations in the Swat Valley of the NWFP, the spokesman for the local Taliban in Swat—a militant known as Muslim Khan—has been making more headlines than any other Taliban spokesman. On February 15, for example, Khan announced a 10-day cease-fire amid reports of fresh efforts by the NWFP government to achieve a new peace deal in the war-torn Swat Valley. Part of Muslim Khan’s  rise to public prominence is due to the growing militancy in the Swat region. It also, however, is due to his multilingual skills and his wide range of experiences working abroad in Western countries, including possibly in the United States. This article identifies Muslim Khan’s background and demonstrates his threat to peace in the region.

As Pakistan grapples with a growing insurgency in its lawless FATA region, there has been a rise in violence in Swat, a picturesque valley in the NWFP. Swat has become another flash point in Pakistan’s struggle against extremism. Dozens of military operations since November 2007 have proved ineffective. The valley has come under the control of Maulana Fazlullah, a radical mullah allied with the Taliban and al-Qa`ida [1]. Using an illegal FM radio station to broadcast his propaganda—in addition to commanding thousands of armed fighters—Fazlullah has converted the Swat Valley into a mini-Taliban state. In this mini-state, women’s education is completely banned, and alleged bandits, drug smugglers and other criminals are publicly lashed on the orders of Taliban courts. Since November 2007, approximately 1,200 civilians and 189 military personnel have been killed in the Swat fighting, while 2,000 civilians have been injured [2].

As a result of Fazlullah’s lack of formal education and aversion to the media, his spokesman, Haji Muslim Khan, has become the public face of the new mini-Taliban state in Swat. Although Khan has been part of Fazlullah’s militia for approximately two years, he rose to prominence in April 2008 when he replaced Siraj Uddin as a spokesman for the Swat chapter of the TTP. His appointment occurred amid fierce fighting between Taliban militants and security forces competing for control of the valley. A month after assuming the position of spokesman, he found himself at the center of a major political development when he led the Taliban negotiations team that struck a peace deal with the new government in the NWFP, led by the Awami National Party [3]. As the head of the negotiations team, Khan put forth four main demands: the implementation of Shari`a in the Swat Valley; the withdrawal of the Pakistan Army from the region; compensation to those affected by death or injury due to military operations in Swat; and the unconditional release of all people detained during military operations. Although the peace deal failed bitterly, the intense media attention surrounding the negotiations, combined with the signing of a deal, propelled Muslim Khan into the spotlight. This allowed him to play a leading role in the TTP.

A Journey from Liberal Politics to Religious Extremism

According to Muslim Khan’s own account, he is 55-years-old and was born in Koza Banda village in the Swat Valley [4]. After completing high school in his native village in 1972, Khan said he attended further studies at the Government Graduate Jehanzeb College Mingora, which is in the main town of the Swat Valley [5]. During that time in Pakistan’s politics, Zulfiqar Ali Bhutto, the father of slain politician Benazir Bhutto, was the prime minister. Upon entering postgraduate college, Khan was impressed by Ali Bhutto and the philosophy of the Pakistan People’s Party (PPP). He joined the party’s student wing, known as the People’s Students Federation (PSF). Khan viewed favorably a religious figure, Maulana Kausar Niazi, who was a central leader in the party and who promoted Islam and Shari`a [6].

Khan, however, was not a normal party activist. He staunchly participated in the party’s activities and once resorted to kidnapping two government officials as revenge for killing a PPP student activist [7]. In response to the crime, Khan was placed in jail for 25 days on kidnapping charges [8]. His association with the PPP demonstrated his liberal ideals during his youth. Khan claims, however, that he was “emotional” during this time, and did not truly understand the real policies of the PPP [9].

In the early 1990s, Khan joined Tehreek-e-Nafaz-e-Shariat- e-Mohammadi (TNSM), or the Movement for the Implementation of Islamic Laws [10]. TNSM was led by Maulana Sufi Mohammad, who launched its struggle for the implementation of Shari`a in the Malakand region of the NWFP. As part of TNSM, Khan was involved in many of the group’s protest rallies, including the one against Benazir Bhutto’s second regime in 1994 when the whole region was brought to a standstill due to the demand for the implementation of Islamic laws. A few years ago, however, Khan fell out with TNSM and began opposing its chief, Sufi Muhammad, for adopting what he calls a “soft approach” toward the implementation of Shari`a. In early 2009, Khan called TNSM a “fiction of old men who can do nothing” [11].

In July 2008, Khan said in an interview that he had traveled to Afghanistan to fight “foreign infidels” [12]. He did not, however, identify the details of the fighting. When asked about his views of democracy, he firmly stated that the “concept of the Western form of democracy is against Shari`a” [13]. According to Khan, “I am all about khilafat and this is my appeal to the Muslims around the world to get united as an umma and form a single army and single currency” [14]. When asked about the aims and objectives of the Taliban movement, Khan said that “initially we want implementation of Shari`a in our own region—Malakand division—and then we would like the same in the North-West Frontier Province and then ultimately the whole of Pakistan” [15].

Khan is harshly critical of the religious party leadership in the country, particularly of Maulana Fazal Rahman and Qazi Hussain Ahmad, the leaders of Jamiat Ulama-i-Islam and Jamaat-i-Islami respectively. He accused the leaders of using the name of Islam to become members of parliament so that they could enjoy the privileges and “perks” that come with such titles [16].

In the mid 1970s, Muslim Khan abandoned his college studies without completing his degree. In the early 1980s, he apparently found a job as a seaman in a British company with the help of the Pakistan Shipping Corporation [17]. He worked for the company for two years. He claims he visited most of Europe and many other countries during his seamanship. Once he left that job, he went to Kuwait where he worked in some transport companies [18]. When the Gulf War broke out in 1991, he left Kuwait for Pakistan along with hundreds of his countrymen [19]. Once back in Pakistan, Khan reportedly started his own business and opened a medicine store in his native town [20].

Most interestingly, when Khan was an active member of TNSM, he allegedly came to the United States. Although the exact date of this entry is not known, it is estimated to be around 1997-1998. Khan purportedly lived in the Boston area in the state of Massachusetts on a visitor’s visa until 2000. According to some sources, he worked as a craftsman in a painting company [21]. Although Khan has made these claims to many journalists during interviews, he has yet to provide further details about his alleged stay in the United States.

Although Muslim Khan has stated that he takes his overall orders [22] from Baitullah Mehsud, there is speculation that the two factions have parted ways [23]. Differences arose after Muslim Khan adamantly proclaimed in January that girls would not be able to attend school in Swat. The chief spokesman under Baitullah Mehsud, Maulvi Omar, reacted to the proclamation, telling reporters that the TTP had nothing to do with the closure of the girls’ schools in Swat. These differences have yet to be resolved.

Muslim Khan’s multilingual skills and his rich experience in working abroad in Western countries make him a rare talent for the Taliban movement, a group that involves mostly madrasa graduates and illiterate activists. His duties for the Taliban range from the explanation of how Shari`a should be implemented, waging jihad against U.S.-led NATO forces in Afghanistan, and claiming responsibility for the day-to-day bomb blasts and attacks on government installations and girls’ schools in Pakistan. Muslim Khan has become a key leader in the Taliban movement, and it is likely that his responsibilities will increase as the conflict rages on.

Imtiaz Ali is a Pashtun journalist who has recently worked as a special correspondent for the Washington Post in Pakistan’s tribal belt and frontier province. Mr. Ali previously worked with the BBC Pashto Service and London’s Daily Telegraph for five years and extensively reported on the rise of the Pakistani Taliban. He worked with Pakistan’s premier English-language newspapers, The News and Dawn. Mr. Ali has recently served as adviser to the Network 20/20—a New York-based non-profit organization—in the preparation of their report “Another Kind of Partner: A Paradigm for Democracy and CounterTerrorism in Pakistan” (2008). He was a Knight Journalism Fellow at Stanford University in 2006 and was a Yale World Fellow in 2008. Currently, he is at Yale University.