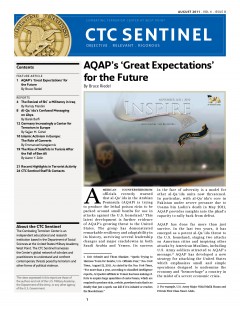 In the aftermath of the “Arab Spring,” many analysts proclaimed that it was the death knell of al-Qa`ida and its ideology, while others warned that it would open space for al-Qa`ida to exploit and even potentially take over a government similar to the 1979 Iranian Revolution. These two narratives miss the point. Indeed, jihadist ideology has been marginalized and has opened space for other schools of thought to counterbalance it. Yet, at the same time, in societies such as Tunisia where religion has been suppressed at the hands of a dictatorial government, it has created new opportunities for individuals to organize at the local level, including non-violent political Salafists who sympathize with intellectual aspects of jihadist ideology.

One such Salafist group is known as Ansar al-Shari`a in Tunisia (AST), and its media outlet al-Qayrawan Media Foundation (QMF). It is not clear whether AST was organized prior to the fall of former Tunisian President Ben Ali’s regime, but if it existed beforehand it would have been highly covert due to the repressive environment under the previous government. Regardless, since April 2011 the group’s activities are increasingly public, holding rallies and even creating Facebook pages. AST has garnered the attention of online jihadists at Ansar al-Mujahidin and al-Jahad al-`Alami, two of the most popular Arabic-language jihadist forums.

This article chronicles the rise of AST, showing how the group is a product of the new openness in Tunisian society as well as the liberation of the “public square” in the Arab world as a whole. This new commons has featured a rise in Salafist movements, creating challenges for Western states that want to establish diplomatic relations with new actors in transitioning Arab societies.

To navigate the maze of new actors, it is crucial for Western governments to go beyond understanding the old Islamist parties linked to the Muslim Brotherhood (as well as the secular and liberal trends), but also the growing prominence and broader trend of Salafist movements in Tunisia and the Arab world.

The Public Rise of AST
On April 27, 2011, a blog titled the al-Qayrawan Media Foundation was created.[1] Two days later, the same organization established a Facebook page.[2] Additionally, it created a supplementary Facebook page under the name Ansar al-Shari`a in Tunisia on May 15, which coincided with the announcement of a conference being convened in Tunis on May 21.[3] A day later, on May 16, QMF’s conference announcement appeared on the Ansar al-Mujahidin Arabic Forum (AMAF), a top-tier al-Qa`ida forum, and a second-tier forum, al-Haqiqiyyah al-Ichbariyyah. Following the conference, on May 25 the AMAF released a series of photos from the conference, which were later posted in June on both QMF’s and AST’s Facebook pages.[4] The pictures were more popular than the conference announcement and appear also at al-Jahad al-`Alami, al-Majahden, al-Haqiqiyyah al-Ichbariyyah, and al-Jahafal forums. Based on pictures from multiple events and rallies, there are approximately a few hundred supporters that publicly follow the group.

Even though it is difficult to assess connections that AST has with the online jihadist community, it does show that some of the members of the forums may be connected with the movement and have an interest in giving it a wider audience in the online jihadist world. Although the group has refrained from calls to violence, it has reposted content from Hani al-Siba’i and Ayman al-Zawahiri (who they describe as the amir) on its Facebook page.

Since the launch of the blog and Facebook page, AST has released 29 statements, essays, and audio messages. Ten have specifically come from AST, while others have been authored by a variety of individuals: al-Khatib al-Idrisi al-Bukhari, Munir al-Tunisi, Abu Ayyad al-Tunisi, Abu al-Wafa’ al-Tunisi, ‘Abd Allah al-Hijazi, and Abu Ayyub al-Tunisi. Additionally, in many AST communiqués, they highlight key historical events in Tunisia’s Islamic history and link it back to the current state of affairs. For one, QMF is an allusion to the famous Tunisian city Qayrawan, which is considered by some to be the fourth holiest Islamic city and holds the Mosque of Uqba, a place for elite scholastics in the first few Islamic centuries.[5] Also, QMF’s first official release states that it is the descendant of Yusef bin Tashfin (1061-1106 CE), the king of the Almoravid Berber kingdom, who conquered Morocco, founded Marrakesh, and reunited the Muslim Taifa kingdoms in al-Andalus, holding off the Christian reconquista.[6] It is not surprising that Tashfin is noted since he is a great figure in North African jihadist lore. He also gets a fair amount of mentions in al-Qa`ida in the Islamic Maghreb’s literature as well.[7]

AST’s Most Recent Activities
The biggest issue that AST has taken up in recent months has dealt with the arrest of its members, as well as Tunisian prisoners held in Iraq. In late June, the Tunisian transitional government started cracking down on Islamists and jihadists.[8] Some of the members of AST were thrown into jail, but later released.[9] In mid-August, AST also rallied against what they describe as unjust and aggressive arrests of youth from the city of Manzil Bourguiba in northern Tunisia. They condemned the unfair treatment they have been subjected to in military court.[10] The history of Islamic extremism shows that jail time can have a radicalizing effect on individuals. As a result, if members of AST are subjected to torture in the future, one may see an organization that has favored peaceful protests and non-violent actions alter its tactics and take a more aggressive approach.

Toward the end of July, AST also started a campaign to try and free Tunisian prisoners in Iraq who they believe have been unfairly arrested. It warns against a repeat of the lack of justice in a trial that sentenced Tunisian Yosri ben Fakher Trigui to death in 2006. It also pleas for Tunisian officials in Iraq to help resolve the situation, although it believes that the most significant obstacle is the unwillingness of the transitional government to take action.[11] On August 23, AST conducted a peaceful sit-in in front of the Iraqi embassy in Tunis to demand the release of Tunisian prisoners.[12]

Another sign of the group’s potential growth is their announcement on July 24 that they were going to soon publish the first issue of a new magazine titled Echo of the Helpers (Sada al-Ansar). Once the magazine is released, more can be learned about the group. They may release the first issue during ‘Id al-Fitr at the end of Ramadan to celebrate the holiday and to show the progress the organization has made in just a few months, as well as to project the tone of the group going forward.

Conclusion
Based on the content AST has released in the form of statements, essays, and videos, the group does not seem interested in global or local jihad. Rather, most of the issues the group is agitated about deal with local problems, and they have expressed their views through peaceful protests. For example, AST is very concerned with the so-called secularists in Tunisia who they see attempting to drive religion out of the state. Although at times the United States, France, and Israel are mentioned, it is not in the context of waging jihadist war against them. Instead, they are concerned about the United States and France meddling in their society. As for Israel, they do not want to establish official diplomatic relations with a perceived enemy. Therefore, the rise of AST coincides with the spread of Salafism in the region and is similar to the more pronounced public show of it in Egyptian and Jordanian societies.

It is premature to determine AST’s future, but it is a fascinating example of how groups in societies that did not have the opportunity to organize have used their newfound freedoms to propagate their cause. It also raises important questions for the West when engaging with transitioning Arab societies. Not only will the West have to better understand and come to terms with the older Islamist parties that are usually linked to the Muslim Brotherhood, but also new Salafist groups that are smaller yet whose influence could potentially grow with greater room for the dissemination of their program.

Aaron Y. Zelin is a research associate in the Department of Politics at Brandeis University and maintains a blog at Jihadology.net.

[5] The mosque is named after the Muslim General Uqba ibn Nafi who founded the city of Qayrawan in 670 CE. He served at the pleasure of the Umayya dynasty and played an important role in the Islamic conquests of North Africa.

[6] This statement can be accessed at www.al-qayrawan.blogspot.com/2011/04/httpwww.html.