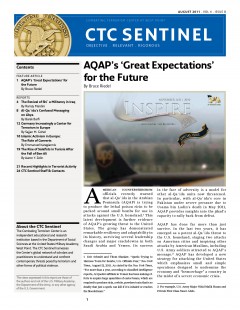 AQAP’s ‘Great Expectations’ for the Future
By Bruce Riedel

American counterterrorism officials recently warned that al-Qa`ida in the Arabian Peninsula (AQAP) is trying to produce the lethal poison ricin to be packed around small bombs for use in attacks against the U.S. homeland. This latest development is further evidence of AQAP’s growing threat to the United States. In the last two years, AQAP has emerged as a potent al-Qa`ida threat to the U.S. homeland, staging two attacks on American cities and inspiring other attacks by American Muslims, including U.S. Army soldiers attracted to AQAP’s message. This article highlights al-Qa`ida’s resiliency in the Arabian Peninsula, examines its strategy of defeating the United States and its allies through “a thousand cuts,” and identifies the group’s local and regional ambitions.

Germany Increasingly a Center for Terrorism in Europe

The Revival of Shi`a Militancy in Iraq

AQAP’s ‘Great Expectations’ for the Future

Islamic Activism in Europe: The Role of Converts