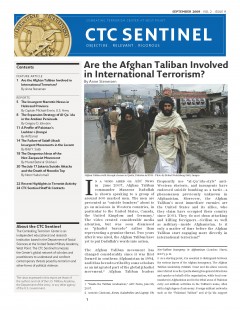 on july 17, 2009, two suicide bombers struck the JW Marriott and Ritz-Carlton hotels in Jakarta, Indonesia, killing seven people. Indonesian authorities are still investigating the attacks and have not yet compiled enough evidence to know the exact parties responsible. Speculation, however, fell on Noordin Mohamed Top, a militant who led a faction of the al-Qa`ida-linked Jemaah Islamiya (JI) terrorist group.[1] The hotel bombings shocked Indonesia because conditions in the country have been relatively peaceful since the last attack by Noordin’s group in Bali in 2005. In the 2005 attack, three bombs struck two tourist areas, killing at least 26 people, among them foreign nationals.[2]

Since 2002, Indonesian authorities have managed to arrest most of JI’s senior members. More importantly, they have succeeded in gleaning information about the JI network and ideology from interrogations. Authorities have also confiscated a significant amount of JI’s explosives material, and they have foiled various plots, such as an attempt to blow up a café frequented by Western tourists in Bukittinggi, West Sumatra in 2008 and the planned assassination of a foreign national there.[3] Most significantly, after nearly seven frustrating years of near misses and false leads, Indonesian authorities finally managed to kill Noordin Top on September 17 at the end of a bloody nine-hour siege in Central Java. [4] Despite Noordin’s death, JI, and especially the remaining members of Noordin’s pro-bombing faction, remains a threat to Indonesian security.

This article will offer a profile of Noordin Mohamed Top, describe his pro-bombing faction of JI, and assess the future dangers posed by this violent faction.

Profile of Noordin Mohamed Top
Jemaah Islamiya is currently a crippled organization. It officially opposes bombings and encourages its members not to participate in attacks.[5] JI’s mainstream faction has adopted a “soft” approach to its mission of Darul Islam [6] and has focused on preaching and conducting charity work. Yet its potential for violence remains as a result of an internal split that created a more hardcore splinter group led by Malaysian JI member Noordin Mohamed Top. Noordin has orchestrated terrorist operations in Indonesia since his first attack on the JW Marriott in 2003.

Born on August 11, 1968 in Malaysia, Noordin was charismatic and generally reserved.[7] One of his former associates described him as a man of high discipline in carrying out amaliyya (the code for terrorist acts).[8] He switched locations regularly and never used a cellular phone.[9] He was considered an expert at avoiding security forces. According to Ali Imron,[10] who was involved in the first Bali bombing, Noordin was a student of the late JI leader Ali Ghufron (also known as Mukhlas)[11] when he taught in Pesantren Lukmanul Hakim[12] in the 1990s in Johor Bahru, Malaysia. When Noordin joined the JI organization, he was still a lecturer at a university in Malaysia where he taught computer science.

Noordin was not involved in the 2002 Bali bombing because he had just arrived in Indonesia. This allowed him to avoid arrest when governments in the region rounded up a number of senior JI members, especially in Malaysia. Noordin’s role in JI and terrorism increased after his mentor, Ali Ghufron, was arrested in December 2002. Noordin wanted to continue his mentor’s struggle by assuming leadership of all future bombing campaigns, beginning with the August 2003 JW Marriott bombing in Jakarta. It is not clear whether Noordin had actual bomb-making experience; his skill-set was as a recruiter and manager.

Over the years, Noordin grew increasingly radical and seemingly adopted some of al-Qa`ida’s video propaganda tactics. After the death of his JI associate and bomb expert Azahari[13] in 2005, for example, Noordin released a video threatening the West:

The video was posed in a Zarqawi-like setting, with a masked man, believed to be Noordin, explicitly threatening the West.

Noordin Top’s Faction
The number of hardcore members in Noordin’s JI faction is not known, although some analysts believe it is no more than a handful. Noordin’s faction is known to actively seek martyrdom operations. The group’s main principle to live by is Innal hayata la aqidatun wal jihad (life’s purpose is to maintain faith and jihad).[15] Due to the group’s willingness to accept martyrdom operations, they are ready to face various challenges and risks, including the threat of prison or death. As stated by one prisoner who was implicated in the 2005 Bali bombings, “To die fighting for our faith is noble, and heaven awaits our arrival with 72 beautiful angels.”[16]
One imprisoned militant, interviewed in June 2009, explained how Noordin recruited new martyrs: “At the moment, Noordin never goes looking for people committed to the cause, but rather young people seek him out to sacrifice themselves. If you are on the same track, you will be able to find him.”[17] Committed martyrs consider their actions as istishhad (the search to become a shahid, or martyr), and not suicide.

Eluding Arrest and Recruiting New Members
For the last seven years, Noordin managed to elude arrest because he enjoyed protection from hardcore members of the JI community and other individuals who shared his ideology. His sympathizers consider the Indonesian government a “secular government which has succumbed to the interests of the USA and its allies; it is therefore the enemy and may be engaged in combat.”[18] Although internal differences among JI members are apparent, it has not regressed to the point that group members are regularly cooperating with authorities in arrests.

Although Noordin’s splinter faction is likely under 50 members,[19] it has the full support of dedicated youth who share a deep commitment to the jihadist cause. This allows the faction to recruit new members. According to one member of Noordin’s faction when describing its agenda, “Don’t just stick to the big jamaah (group). We have to support jihad anywhere and everywhere including in Iraq.”[20] For this member, jihad is fard `ayn (personal obligation) and it is therefore legitimate for any group or individual to carry out jihad based on their own initiatives and methods.

In this context, Noordin won fresh recruits from among hardcore members who “idolized” him and believed that the use of violence against the enemies of Islam is justified in any situation. Hardcore members also consider many senior JI members to be “NATO” (No Action, Talk Only) and no longer passionate in their commitment to the jihadist movement. This is because many JI members have matured, married and taken on family considerations.[21]

Members of Noordin’s pro-bombing faction are a fringe minority within JI. Nevertheless, it does not take a large organization to commit major terrorist attacks. The 2005 Bali bombing, for example, was committed by only three individuals who were willing to blow themselves up for the cause.[22]

Future Dangers
Noordin’s death is a major government success. Yet if it is determined that Noordin’s faction was behind the July 17 Jakarta attacks, it demonstrates an advanced level of efficiency, sophistication and novelty of tactics compared to their previous operations that relied on vehicles and backpack bombs.[23] In the case of the 2009 Jakarta hotel bombings, Noordin’s key associate, Syaifudin Zuhri, allegedly recruited both of the suicide bombers and had them stay overnight in luxurious hotels.[24] The recruits assembled their bombs inside their hotel rooms. This allowed maximum operational security.

It is possible that Syaifudin Zuhri will succeed Noordin with the help from at least three of his followers, including Nur Hasbi, who is wanted in connection with the July 17 bombings. Two other possible successors are Reno (also known as Tedi) and Maruto Jati Sulistiono.

Unfortunately, there is no way to draw a profile of future JI suicide bombers. Previous profiles of suicide bombers, for example, describe young men, religiously devout, alienated from society, and social and psychological outcasts. Yet the two bombers in the 2009 Jakarta hotel bombings did not fit this profile. Dani Dwi Permana, 18-years-old, was a former high school student in Bogor, West Java. Dani’s teacher described him as not very talkative, but intelligent and diligent in his studies.[25] Dani sat on the executive committee of the school’s Intra-School Students Organization (OSIS) and was known by all of the school’s students.[26] He passed the school’s final examination in 2009, but still had to collect his SMA (high school) diploma.[27] In the case of the second bomber, Nana Supriyatna, 28-years-old, his neighbors describe him as “sociable” and “friendly.”[28] No one terrorist profile is likely to ever be drawn.

Noordin’s faction will continue to rely on the traditional tools of recruitment such as schools, kinship networks, friendships and small Islamic discussion groups.[29] To make matters more difficult, Noordin’s group have also embraced new technologies such as CDs, DVDs, coded SMS messages, secure e-mail, and password-protected websites to communicate and connect to new potential recruits. Until Noordin’s faction is dismantled, Indonesia will remain at risk for future terrorist attacks.

Noor Huda Ismail is an executive director of a Jakarta-based, private think-tank called the Institute for International Peace Building. He earned a master’s degree in international security from St. Andrews University, Scotland.

[1] Jemaah Islamiya is no longer a cohesive organization with a unified leadership structure. Divisions appeared in the group after the first Bali bombing in 2002. Noordin’s faction is the only group in Indonesia that has conducted suicide attacks.

[6] Its mission is to reach a world of Darul Islam, or the abode of Islam in Indonesia and beyond.

[7] Personal interview, Abdullah Sunata, Jakarta Police Detention, Indonesia, August 2009. Sunata met with Noordin in 2004 when Noordin sought help from Sunata. Sunata refused to help Noordin because for Sunata the use of violence is only justified in conflict zones, not in peaceful cities such as Jakarta or Bali.

[10] Personal interview, Ali Imron, Jakarta, Indonesia, June 2009. Ali Imron is one of the main actors of the first Bali bombing. He is also the younger brother of the late Ali Ghufron. Ali Imron spent some time in Johor Bahru where he met Top.

[11] Ghufron planned and executed the 2002 Bali bombing and was executed by the Indonesian government in November 2008.

[19] There is insufficient evidence to know the size of the faction, but the author estimates around 20 hardcore members.

[21] This statement is based on the author’s personal observations after a series of interviews with senior JI members.

[29] These discussions, consisting of six-to-ten people, meet regularly for a number of social and religious activities. Due to their perceived harmless nature, these groups inhibit authorities from preventing possible violent outcomes.