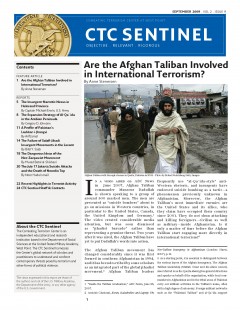 Are the Afghan Taliban Involved in International Terrorism?

This article assesses the likelihood of the Afghan Taliban carrying out terrorist attacks in the homelands of NATO countries that are militarily engaged in Afghanistan. It argues that while individual insurgent commanders have issued threats to attack the West, the senior leaders of the Afghan Taliban are currently uninterested in pursuing such a strategy. While this may be due to a number of factors, this article stresses that such a venture could easily jeopardize the Afghan Taliban leadership’s sanctuaries in Pakistan.

Are the Afghan Taliban Involved in International Terrorism?

The Insurgent-Narcotic Nexus in Helmand Province

The Expansion Strategy of Al-Qa`ida in the Arabian Peninsula

A Profile of Pakistan’s Lashkar-i-Jhangvi

The Failure of Salafi-Jihadi Insurgent Movements in the Levant

The Dangerous Ideas of the Neo-Zarqawist Movement