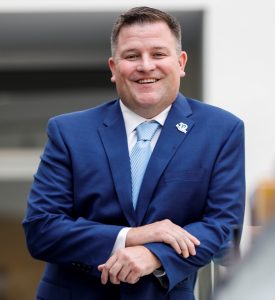 Lieutenant Colonel (Retired) Bryan C. Price, Ph.D. is the Founding Executive Director at the Buccino Leadership Institute at Seton Hall University. Prior to joining Seton Hall in 2018, he spent the first half of a 20-year Army career in operational assignments as an Apache helicopter pilot, including combat deployments in Iraq and Afghanistan. From 2012-2018, he was an Academy Professor in the Department of Social Sciences and the Director of the Combating Terrorism Center (CTC) at the U.S. Military Academy. He is known for his published research on terrorist leadership and organizational behavior, and he is the author of Targeting Top Terrorists: Understanding Leadership Removal in Counterterrorism Strategy by Columbia University Press. He holds a B.S. from the U.S. Military Academy in U.S. history, an M.A. in international relations from St. Mary’s University (TX), and an M.A. and Ph.D. in political science from Stanford University.  In his role as the CTC Director, he frequently briefed the nation’s top counterterrorism leaders, including the Secretary of Defense, Directors of the CIA, DIA, and NCTC, and multiple combatant commanders. In addition to testifying in front of Congress, he has given keynote talks to national and international audiences.

The Terrorist Lists: An Examination of the U.S. Government’s Counterterrorism Designations Efforts

A View from the CT Foxhole: Joseph Felter, Deputy Assistant Secretary of Defense for South and Southeast Asia