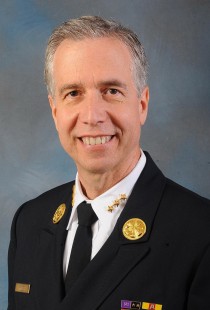 Joseph W. Pfeifer was the Chief of Counterterrorism and Emergency Preparedness for the New York Fire Department (FDNY). During his career, he commanded some of the largest fires and emergencies in the New York City’s history: he was the first Chief at the World Trade Center attack on the morning of September 11, 2001, and played a major command role during Hurricane Sandy in 2012, served as an Incident Commander at the Metro North commuter train Derailment in 2013 and assisted in developing the Ebola response in NYC in 2014. He was the founding director the FDNY’s Center for Terrorism and Disaster Preparedness. Since 2001, he worked as a strategic leader assessing the Department’s response performance, identified new budget and policy priorities, helped overhaul management practices, created partnerships to supplement the Department’s existing competencies with new expertise, shaped new technologies for emergency response and developed the FDNY’s first Strategic Plan, Terrorism Preparedness Strategy, and Continuity of Operations Plan. He produced weekly analyses of threats and crisis response throughout the world and is also a Citywide Command Chief, responsible for commanding major incidents.

Chief (Ret.) Pfeifer has spoken both nationally and internationally, including the United Nations General Assembly Conference on Fighting Terrorism for Humanity. He is a Senior Fellow at the Combating Terrorism Center and the Program on Crisis Leadership at Harvard Kennedy School. In addition, he has spoken at the United States Military Academy, Harvard University, Columbia University, Wharton Business School, The Naval Post Graduate School, Tsinghua University in Beijing, and to classes from both the Army and Navy War Colleges. Chief (Ret.) Pfeifer holds a Masters in Public Administration from Harvard University’s Kennedy School of Government, a Masters in Security Studies from the Naval Postgraduate School and a Masters in Theology from Immaculate Conception. He writes frequently and is published in various books and journals.

Fire as a Weapon in Terrorist Attacks