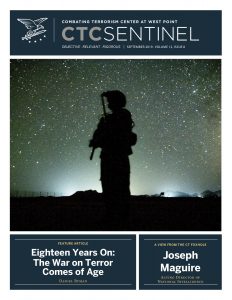 This September 11th, a new generation is taking up the mantle in the fight against terrorism. “Later this year, a U.S. service member is likely to be deployed to Afghanistan who was not yet born on September 11, 2001,” Daniel Byman notes in our feature article on the jihadi terror threat facing the United States 18 years later. He assesses “although the operational freedom of jihadi groups is constricted by U.S. and allied counterterrorism efforts, the jihadi cause as a whole has far more local and regional influence than it did in the years before 9/11, it is better able to inspire individuals in the West to act on its behalf, and groups have proven resilient despite the fierce U.S.-led onslaught.”

Our interview is with Joseph Maguire, the United States’ Acting Director of National Intelligence. He says that “since the catastrophic attacks on 9/11, we have significantly diminished the ability of jihadists to strike the U.S. by removing hundreds of leaders and operatives, disrupting dozens of networks and plots, and degrading safe havens. But some jihadist groups still have that intent, not only to target the homeland but also our interests overseas. They are continually adapting to setbacks by modifying their tactics, seeking out alternative safe havens, and using new and emerging technologies to communicate, recruit, and conduct attacks. This makes for an increasingly diverse and unpredictable threat.” As the terror threat evolves, Acting Director Maguire stresses the importance of addressing the still-significant security challenges posed by the Islamic State in Syria, Iraq, and beyond given the group still poses a “tremendous threat” and has “all the recipes” for a resurgence.

Amira Jadoon and Andrew Mines examine Islamic State Khorasan’s leadership losses between 2015 and 2018 by leadership tier, year, and geography. Their findings highlight “the group’s tenacious presence in Nangarhar (Afghanistan) and Baluchistan (Pakistan), despite declines in overall number of attacks. An important factor contributing to ISK’s resiliency appears to be rooted in its steady recruitment of experienced Pakistani militants that sustain its leadership ranks.” Two years after the Marawi siege in the Philippines, Julie Chernov Hwang outlines the motivations for joining the Maute Group based on her interviews with 25 former members of the jihadi group and a related faction. Aaron Zelin and Katherine Bauer outline the significant progress Tunisia has made over the past two years in developing domestic counter-terrorism finance capabilities.

Eighteen Years On: The War on Terror Comes of Age

A View from the CT Foxhole: Joseph Maguire, Acting Director of National Intelligence

Relatives, Redemption, and Rice: Motivations for Joining the Maute Group