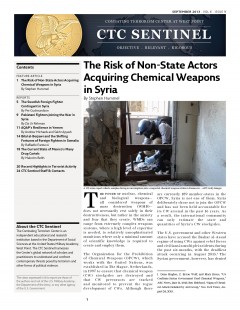 The power of nuclear, chemical and biological weapons—all considered weapons of mass destruction (WMD)—does not necessarily rest solely in their destructiveness, but rather in the anxiety and fear that they create. WMDs can range from extremely complex weapons systems, where a high level of expertise is needed, to relatively unsophisticated munitions where only a minimal amount of scientific knowledge is required to create and employ them. The U.S. government and other Western states have accused the Bashar al-Assad regime of using chemical weapons (CW) against rebel forces and civilians in multiple incidents in Syria during the past six months, with the deadliest attack occurring in August 2013. This article explores the CW dynamic of the Syrian civil war and the potential for non-state actors to acquire or employ these weapons. It finds that there is a risk, albeit an unlikely one, that non-state actors could gain control over a limited number of CWs in Syria. Yet the successful employment of CWs would prove difficult for a small terrorist organization.

The Risk of Non-State Actors Acquiring Chemical Weapons in Syria

The Current State of Mexico’s Many Drug Cartels