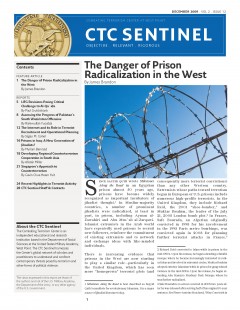 Over the last two years, thousands of Iraqi detainees have been released from prisons in compliance with Iraq’s 2008 general amnesty law and the U.S.-Iraq Security Agreement that was enforced in January 2009. Following the withdrawal of U.S. combat troops from Iraqi cities in June, and the upsurge in violence in several provinces—mainly Baghdad, Ninawa and Diyala—the Iraqi government has repeatedly blamed prisoner releases for providing al-Qa`ida in Iraq (AQI) with new opportunities to stage high-profile attacks.

On December 8, 2009, for example, 127 people were killed in a series of coordinated attacks that struck government sites in Baghdad; the attacks were endorsed by AQI’s Islamic State of Iraq (ISI).[1] AQI also claimed responsibility for several other deadly operations, including the October 25 suicide attacks that targeted the Iraqi capital’s Ministry of Justice and provincial council, the execution of 13 Sunni tribal members in Abu Ghurayb in November, and the suicide attacks against the ministries of Foreign Affairs and Finance in Baghdad that killed more than 100 people in August.[2] Rising tensions in cities such as Mosul and in Anbar Province, where violence had declined drastically since the U.S. “surge” in 2007, indicate a return of armed jihad in Iraq and raise doubts over the sustainability and durability of its stabilization process.

This article explores the connection between the numerous prisoner releases in Iraq since 2008 and AQI’s resurgence. Emphasis will be laid on the pervasive effects that the amnesty law and U.S.-Iraq Security Agreement have had on the release of radical inmates from prisons and their implications in recent terrorist operations. Of the 73 men arrested by Iraqi police in November and accused of involvement in the August suicide attacks in Baghdad, several acknowledged established ties with AQI and other radical groups during their incarceration.[3] In a context of economic uncertainty and widespread corruption and bribery that provide fertile ground to insurgents, prisons now appear to have become the primary crucible of jihadist ideology and Islamist radicalization in Iraq, raising new security concerns and casting doubts on the Iraqi government’s ability to maintain security ahead of the upcoming elections scheduled for March 7, 2010.

Iraq’s general amnesty law came into effect in February 2008. At the time of its adoption, the law was part of Prime Minister Nuri al-Maliki’s national reconciliation effort aimed at drawing the alienated Sunni Arab community back into the political process and convincing former jihadists to renounce violence.[4] Throughout 2008, more than half of the total detainee population was released, which consisted of 17,800 inmates out of a total of 33,600.[5] Since January 2009, the first steps in the implementation of the U.S.-Iraq Security Agreement have witnessed the transfer of thousands of new prisoners from U.S.-run facilities to the Iraqi authorities, including the release of more than 5,000 inmates.[6]

Originally, as provided by Article 5 of the Iraqi amnesty law, detainee releases had to be conducted “in a safe and orderly manner” by judicial committees designated in each Iraqi province by the Supreme Judicial Council, composed of first-class prosecutors. The law only pertained to inmates facing less significant charges, and each committee was tasked with carefully reviewing detainee criminal records before their release to ensure that they had not committed serious crimes not covered by the amnesty—such as terrorism and sectarian manslaughter.[7] Article 6 of the law added that Iraqi police and judicial forces had to take appropriate measures prior to a detainee transfer or release by Multinational Force-Iraq (MNF-I).

While MNF-I argues that recidivism rates among released detainees have been low, so far most releases have occurred in a context of Iraqi police and military forces not yet able to maintain security, weak rule of law and judicial authorities not equipped with the tools to properly monitor former prisoners. For instance, the 2008 amnesty law does not make provisions for the post-detention surveillance of inmates by Iraq’s judiciary [8] and is therefore being reviewed by Iraqi lawmakers; it must be amended in 2010 so that the amnesty strictly excludes prisoners held on terrorism charges. Yet, existing legal gaps, concrete negligence in the application of the law and other shortcomings have already allowed a number of radicals to be pardoned and freed, several rejoining the armed insurgency.

Endemic corruption and bribery also play an important role. Iraqi officials from the Ministry of Interior have reported that approximately $10,000 in bribes were given to various accomplices to facilitate the movement of AQI suicide bombers—some of whom allegedly former Ba`ath Party members [9] —through security checkpoints during the August 2009 bombings.[10] Again, according to the Ministry of Interior, AQI-related prisoners frequently bribe prison guards to acquire cell phones used to contact outside insurgents. In other instances, prison guards directly help radical inmates escape. As reported by provincial officials from Salah al-Din Province, in September 2009 16 AQI members, including Muammar Abd al-Salam Mahdi, who was detained for the murder of Iraqi police officers, managed to escape from a prison facility in Tikrit due to the complicity of their guards.[11]

AQI and radical insurgent factions also benefit from corrupt members within the Iraqi judiciary—interrogators, lawyers, prosecutors and judges—who are bribed to release AQI affiliates through the issuance of illegal warrants, identity falsification and expunged criminal records.[12] In October 2009, a lawyer from Mosul was arrested by Iraqi security forces for bribing guards to release members of AQI.[13] Such collusion has apparently become so common that Iraq’s Supreme Judiciary Council ordered an investigation this June and made a formal request for the international community’s assistance.

A Factor of AQI’s Resurgence

The causal link between significant releases of Iraqi detainees and AQI’s recent resurgence in Iraq has been emphasized by many official Iraqi sources. Several high-ranking representatives from the Ministry of Interior reported in October 2009 that some of the suicide bombers and accomplices of the August 19 and October 25 attacks likely had been former detainees exposed to the AQI narrative during their incarceration.[14] Also, according to the Iraqi police the majority had been detained at former U.S. military bases such as Camp Bucca, closed down in September and which had become a breeding ground for AQI’s ideology.[15]

The current situation raises questions about Iraq’s prison system as the new cradle of jihadist propaganda and its consequences on security if additional detainees are released under similar conditions. Prisons have always been an incubator for radical ideology. The mentor of contemporary Islamism, Sayyid Qutb, wrote his manifesto Milestones Along the Road in an Egyptian prison, and Jordanian jihadist Abu Mus`ab al-Zarqawi recruited his main followers while detained. [16] The radicalization of hearts and minds and recruitment by Islamists within the prison setting is all the easier as facilities are often overburdened and daily conditions precarious.

Despite these problems, U.S. forces did make an undeniable effort to limit radicalization within Iraqi prisons and even pursued deradicalization programs. Referred to as “religious enlightenment,” a first initiative was introduced by the commander of detention operations in Iraq, General Douglas M. Stone, in 2007.[17] It was intended to “reform” Iraqi detainees who had been held for more than a year, by offering them education and counseling with Muslim clerics and psychiatrists to instill in them a moderate approach to Islam and avoid the spread of jihadist ideology. A juvenile facility, known as the House of Wisdom or Dar al-Hikma, was opened at Camp Victory in September 2007 to provide younger Iraqi detainees—who are often the most radical—with educational and employment opportunities, with the goal being to thwart their recruitment into AQI once released.[18]

Following the transfer of U.S.-run prison facilities to the Iraqi government this year, deradicalization programs have been maintained. They continue to focus on the rehabilitation of Iraqi inmates before they are freed, especially those most disposed to AQI’s ideology. While a number of prisoners have been successfully deradicalized, signing an oath not to take up arms once released and reintegrated into civilian life, the efforts to shape attitudes among the detainee population (especially former insurgents) have met evident limits, as illustrated through AQI’s recent resurgence.

Several factors explain why deradicalization programs in Iraq have had mixed results. First, the prison setting makes it difficult for imams ministering in correctional facilities to identify radical detainees who cannot be moderated and therefore should be segregated from other inmates. This uncertainty has likely led to the release of radical elements. Second, while abhorred outside by most Iraqis, AQI’s radical message retains resonance in the prisons, and influences illiterate and disenchanted prisoners in particular. AQI uses the “occupation narrative” as a means of recruiting new partisans. The jihadist organization depicts prisons as the symbol of “infidel” oppression, and identifies the “occupiers” as both U.S. and Iraqi forces. For example, in September 2009, a riot occurred in the newly reopened Abu Ghurayb facility, renamed the Baghdad Central Prison [19], when several AQI-affiliated detainees attempted to overpower security guards.[20]

Although many different factors account for AQI’s resurgence in Iraq, the release of thousands of Iraqi detainees since 2008 could be one of the most significant. The withdrawal of U.S. combat troops from Iraqi cities last summer has also offered AQI partisans new space to operate. After being temporarily defeated through the U.S. surge and its positive effects on security, AQI seems to have reconstituted itself within prisons. A number of released detainees are acknowledged to have re-radicalized during their detention, made contact with AQI, and been involved in several suicide attacks.

Consolidating the security improvements achieved in Iraq since 2007 and keeping AQI on the margin should be a priority for both the U.S. and Iraqi governments. In this regard, a number of concrete steps need to be taken. The legal framework that has allowed the release of dangerous jihadists, the amnesty law in particular, must be comprehensively assessed and amended so that no more protection is granted to them. Strengthening the rule of law and fighting against corruption are also fundamental to rebuilding functional institutions in Iraq. Eventually, within a prison system that offers an ideal environment for the dissemination of radical jihadist ideology, the monitoring of detainees must be reinforced and “irredentist” Islamists rigorously separated from moderate inmates who are more likely to be successfully rehabilitated.

Myriam Benraad is a research scholar at The Washington Institute for Near East Policy and a research associate at the Center for International Studies and Research in Paris-Sciences Po. Previously, she was a consultant for the French Ministry of Foreign Affairs and a policy analyst at the Organization for Economic Cooperation and Development (OECD), Middle East & North Africa Initiative, where she provided expertise and recommendations to the Iraqi government on economic reforms and corruption. She is currently completing her Ph.D. in political science, addressing Iraq’s post-2003 Sunni Arab identity phenomenon.

[4] The amnesty law was supported by the Sunni Tawafuq Front, and was considered a step toward its return to government.

[6]  This estimate is based on publicly released MNF-I data.

[7] Article 2 of the 2008 amnesty law excludes crimes sentenced to death under the Iraqi Penal Code of 1969 and the following criminal convictions: murder, kidnapping, sexual abuse, embezzlement of public funds, counterfeiting of Iraqi currency or foreign currency, forgery of official crimes, drug offenses, smuggling of antiquities, and the crimes set forth in the Military Penal Code of  2007.

[9] The Nuri al-Maliki government has repeatedly blamed Ba`athists and their supporters in countries such as Syria for being behind the recent terrorist attacks in Iraq. It is worth noting, in this regard, that former members of the Ba`ath Party are known to have joined the ranks of AQI and other radical armed groups in 2003, especially the indigenous Salafist trend that gained significant influence among Sunni Arabs during the 1990s.